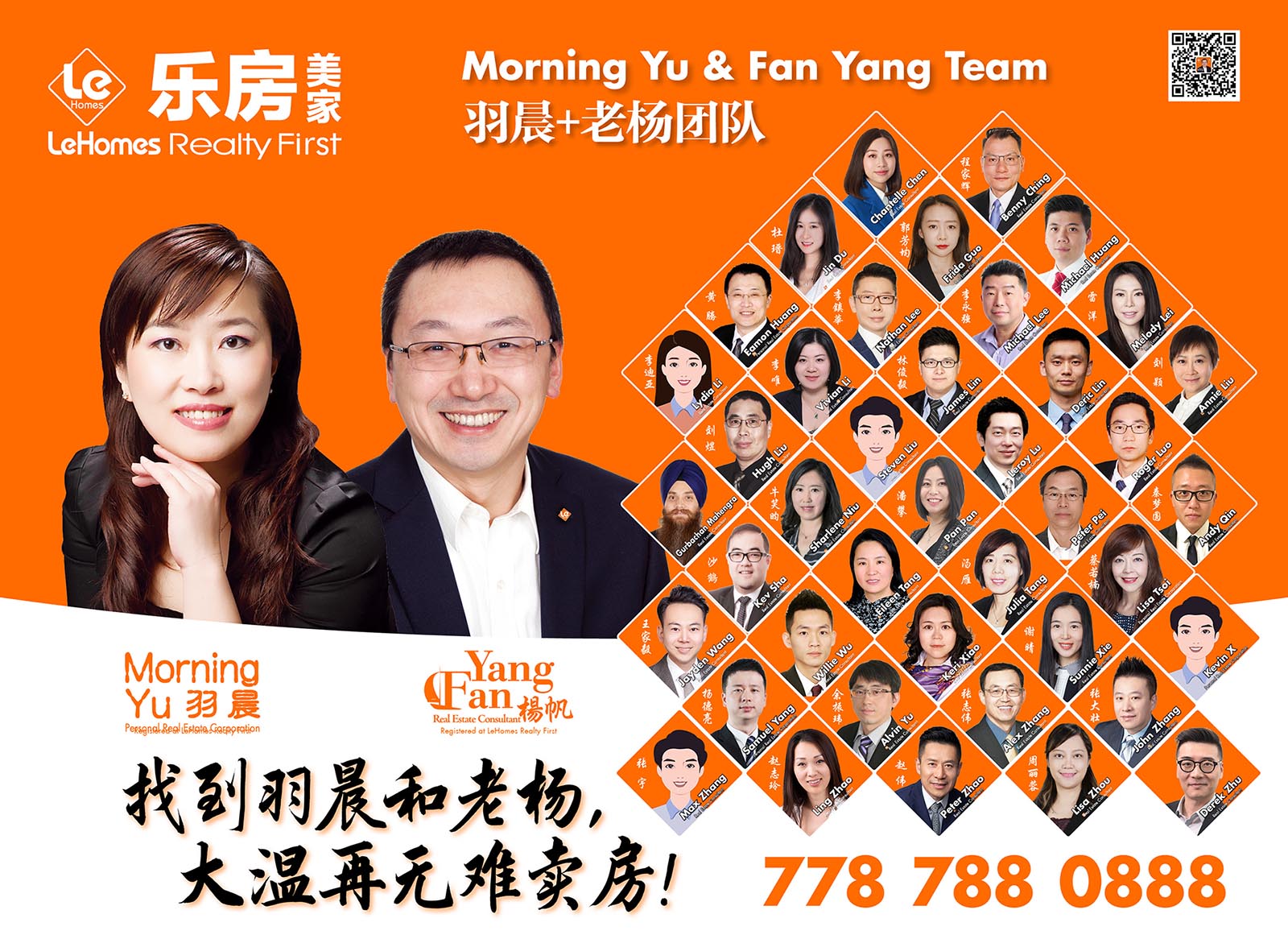 Since 2017, Fan Yang has ranked among the top 1% of realtors in the President’s Club of the Real Estate Board of Great Vancouver, along with achieving second place nationally at Century 21 Canada – making him the sixth most successful Century 21 realtor globally.

Licensed as a realtor with the Real Estate Board of Edmonton in 2009, Fan Yang quickly rose to the top 1% of Edmonton’s real estate market as well as Century 21 Canada, maintaining this elite rank from 2011 to present. Early in 2012, Fan Yang began building his own team of real estate agents, which quickly became an incubator for Canada’s most brilliant and productive real estate talents.

Indeed, be it a search for your dream home, a hunt for the best investment, or a property-selling mission in Greater Vancouver, you are just a call away from the highest quality service and the greatest satisfaction possible. With your best interests in heart and mind, Fan Yang and his team are looking forward to the opportunity of working with you to make your dreams a reality!

Benita Kalke
It was a pleasure having Fan Yang and his team helping in selling our house in Vancouver. Fan Yang was referred by a coworker of my company and he definitely is the best agent I have ever met. It is not only because of his rich experience and knowledge in real estate, but also because of his hardworking, efficiency, and honesty. He clearly explained the process of selling a house to us and had a very accurate estimation of the price. The posting was very impressive with amazing photos and well written descriptions. Our house was sold in three weeks with reasonable price. We were very satisfied and have recommended his team to many of our friends and colleagues. Many thanks again to Fan Yang's team.
Miffy Liu

I am very happy that we have chosen your team. You provide a very professional, quality and reliable service and give us a lot of accurate and candid advice. You care about every customer, you always consider the customer's point of view, fully understand the needs of each customer, always put the interests of the customer first, no matter how long it takes, you will always find it for your customers. The best listing. This is an excellent real estate team. We sold our house in a week and found our dream home. It was a very enjoyable experience and I would be happy to recommend your team to my family and friends. .
Sincerely thank you for your hard work and excellent service!

Aaron Hao
My wife and I recently decided to purchase a dream home for our growing family. For this to happen we needed to sell our existing home and condo in a timely manner, without hesitation we asked Fan for his help. Over last few years we were involved with Fan in multiple transactions, with his vast knowledge of housing market made all transactions seemed simple and fast. In addition to his experience and professionalism Fan's attention to detail is exceptional. Thank you again Fan!
Tony He
Being a long time client with Fan Yang's team. No matter dealing with different agents in the team, I have received the same standard of the professional services. I appreciated their hard working to have my house sold, especially when the market was slow. Strongly recommended.
Zhimin Yin
Due to we have a very good experience with Fan, I recommend him to all my friends who need a realtor. He was always available and quick response. He is able to sale my property at closte to 100% of the listing price. He is also really good in negotiation.

Come find us at